“Poems by Dr Yusof Mutahar” is a poem book by a famous Australian doctor Yusof Mutahar. It is his 4th book of him and first in poem category. The book published on selected poems from his 200 written poems. The poems he has written are Eyes, Red, Excusable, Love and War, Lost, Disturbed, Eclipse, Inner Beauty, Language of Heart, Divine Friendship, The Best Doctor, Spinning Wheel, Drought, Behind the Eyes, Drifting, Paradox, Piercing Arrow, Captivity, Blissful Hibernation and Hourglass. The book was published by Ventura Press, 2021. There are total 29 pages in the book. 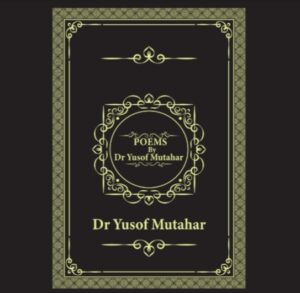